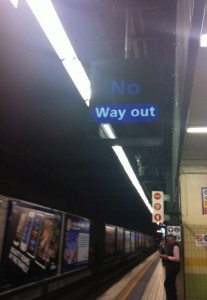 The official Google Android apps market is full of spam and malware.

I’ve seen it in action on a security analysts conference I attended almost a year ago. Ever since I’ve been trying to spread the word to anyone I care about.

I know a CEO of a well known credit card company that got his Android phone tapped. The CEO!

Look, I’ve been telling my close friends for some time now. There is a serious problem with security on Android. People put everything on their amazingly clever phone, but take no precautions on what apps they download.

People, you’re giving access to your credit card, to tapping your calls, to your entire world. Why aren’t you nervous? Are you nuts??

I don’t care how amazingly good or clever these Android phones are. I don’t care for their specifications. I care for my privacy a darn lot more.

It took Microsoft years and years to realize that PC applications should be sandboxed. Apple got it right from day one on the iPhone. When will Google admit they got it wrong?

Android.Dropdialer, a trojan that racks up costly charges from forced calls made to premium phone numbers, was found in two separate titles … according to a blog post published Tuesday by Irfan Asrar, a researcher with antivirus provider Symantec. “Super Mario Bros.” and “GTA 3 Moscow City,” as the malicious apps were packaged, generated as many as 100,000 downloads…

Sent from my iPad

Google is in trouble, and they need your help!

It seems like Google are now asking their users to help them out with their search results pages and site rankings.

That’s a major change to Google’s normal attitude that we’ve been accustomed to in the last few years.

This is what I’m talking about:

Google’s “cry for help” as spotted by Nathan Sauser. It’s a pop-up form that appeared on the search results page, asking him to rate how happy he is with the results. This is what it looks like:

Are Google taking a 180º u-turn from Panda & Penguin updates?

I’ve seen first handed how easy it was to make money online with low quality articles back at 2010. By spreading and posting tons of spun versions of the same articles across multiple content farms like EzineArticles, eHow and Squidoo, marketers captured easy traffic.

It was too easy to make money with bad content and without providing anything valuable to the readers. Those years, internet marketers were taking full advantage of such tactics, and spammy websites were KILLING Google.

Something had to be done. And so, Panda and Penguin algorithms were born.

Panda and Penguin are both Google’s time-tested way to fight spam: with clever algorithms.

But now, it seems like Google are suddenly asking for the users’ opinions. How come?

Why would Google change its attitude?

Although Google certainly does a good job at spotting and penalizing spammy websites, they aren’t perfect.

Internet marketers and SEO experts are always trying to find the next hack, the next trick, that will let them cheat the rankings.

Every time someone comes up a new technique to cheat the rankings, Google makes an algorithm update and the door closes shut – till the next time.

Are Google realizing it’s an endless-circle? Maybe there’s a better way to approach this?

What are Google saying?

Are Google taking these surveys seriously? What exactly are they doing with the feedback they’re getting?

This is what a Google spokesman told Search Engine Land about this new feedback form:

“This is one of our experiments — one of many signals we take into consideration to make search better.”

What can we learn from this laconic answer?

Although it’s only an experiment right now, Google are seriously thinking of making these user feedbacks one of their ranking criteria – that’s massive!

Are Google reinventing a ranking system from 1994?

You know the feeling when you go into a website and you just KNOW it’s spammy?

You just feel the ads looking at you from every corner, affiliate links fill every spare inch of the screen, and you just know subconsciously that it’s time to hit the “back” button, and hit it hard?

The human brain can spot a spammy website from miles away. We can smell it, and it stinks to heaven.

That’s why web portals (remember those?) started off with manual ratings back in 1994. As the internet outgrow this old-fashioned method, web portals vanished and got replaced by a monster with amazing computer analysis skills – Google.

In essence, Google are renovating an old-fashioned ranking algorithm that was abandoned in 1994: The Human Brain. Tweet This

Why does Google need YOUR help?

Google can’t ask their staff members to manually rate all the websites on the internet. It’s obviously unreasonable, impossible and pointless.

But if they get some feedback from their users – even for only 0.1% of the searches, it sums up to 3 million reviews per day (based on world’s statistics).

That makes the ranking efforts somewhat more manageable. And as no one cares what happens after page 2 on Google, you only need to eliminate the spam out of the top 20 sites for a given keyword.

Google will crowd-source spam elimination, while relying on their proven algorithms to keep finding the good sites. Tweet This

Google are already monitoring retweets, likes, +1ones and other social signals. It only makes sense that they’ll collect this user feedback too, and combine it with the already existing social signals.

But this time, you’ll be able to down-vote bad quality sites. Hooray!

What does it mean, and how will it affect you?

It’s all fine and dandy. Maybe even cool. But let’s cut to the chase – how can this affect website owners and internet marketers?

I believe this is Google’s battle cry against spammers.

Websites that have great multimedia content and are publishing it at a good solid pace – will rank well.

Websites getting retweets, likes and +1ones in addition to their great content – will continue to rank even better.

HEY! That’s no news is it? Of course websites with good content that lots of people talk about will rank well! DUH!

If the prescription for Google Love doesn’t change – who cares?

The people that still build websites for search engines, and not for humans. Should care.

The people that build websites only to make fast income from moving web traffic from one site to another. Should care.

Spammers. Your game will soon be over. Build for humans, or don’t build at all. Tweet This

I strongly believe this is the case. Utilizing crowd-sourcing to recognize and deal with spam makes total sense.

What do you think about it? Just a silly survey, or the beginning of a new era? Leave your thoughts in the comments section below!

And please, hit the Like button, the  +1 button and Retweet button, so your friends can enjoy this post too! 🙂

How I fixed a strange battery bug on my iPad

Hi all, just wanted to share something I found out today, and turned out to be not only useful, but also saved me a good few hundred dollars.

Over the last few days, my dear, beloved, iPad had shown a drastic decrease in battery life. I mean DRASTIC. 10 hours of battery? I wish. Try 2 hours. Even when idle, it lost over 60% battery over night.

What did I do? The most pragmatic thing possible – decide to get the new iPad 3! (Sorry, it is actually called “the new iPad“). But, not only the 32 GB (bare minimum for me) is not cheap, also and more importantly – it did not hit Israel yet.

So, like many other iPhone 4S users in last few months, I accepted my fate (or the iPad’s fate), to be paired with its charger as often as possible. But, I thought – maybe it’s a new dammed iOS 5.1 bug. Google Search to the rescue! (how ironic of Google to save my iPad)!.

What I found was Apple’s recommended usage for batteries. In the article, mixed with worthless silly tips like “tuning down screen brightness till you can’t see a bloody thing”, or “disabling WiFi and go into limbo mode” I found one useful pearl:

For proper reporting of the battery’s state of charge, be sure to go through at least one charge cycle per month (charging the battery to 100% and then completely running it down).

Basically, this meant to me that my battery is fine and dandy, but the iPad had no clue as to how good it’s (battery) life really is. Well, I let the iPad run GPS navigating to nowhere while playing (funky) music, till it gave out, blacked out, and died its heart out. Then charged it for several hours.

The result? After over an hour’s work / web surfing + 4 idle hours, battery is at a staggering 99%.

It’s a Xmas miracle! (always wanted to say this). Better than snow in July.

So, if you are facing trouble with Apple devices’ batteries – give it a try. The doctors at Apple say it should be done once a month.

And to the dear people who own on iPhone 4S (@Ed Dale i’m looking at you) I shall say this: Even if this tip does not help you, and the iOS 5.1 release didn’t fix your battery bug, at the very least – you will always have Siri.

(Until the battery dies)