2012 was an amazing year for me. I left my dead-end job; I started an entrepreneurship magazine; I moved to a new country; I spent 1×1 time with internet marketing gurus Ed Dale and Guru Bob; I attended the ePub conference in LA and met amazing people who have become dear friends of mine; I moved countries once again, and finished 2012 by helping Julie launch her own makeup magazine.

Here’s the funny thing: Judging by my last year’s resolutions I had little hits and a ton of misses. How can a year — where I hardly accomplished any of my plans — end up so great? That was the question I needed to answer in order to make 2013 even better.

I got lucky in 2012, but that’s not surprising given the fact that luck can be created by massive action taking. In 2012 I unleashed some wild action-taking practices, and made sure to grab the bull by the horn. But how can I use my new year’s resolutions to guide and direct the sheer force of action-taking in 2013?

I found the answer to this question at the LA Marriott Airport Hotel, in the hands of Phil Lopez.

All goals are composed of ‘what’, ‘why’, and ‘how’; All of your goals must resonate with your core values. The ‘what’, the ‘why’, the ‘how’ — must all resonate with the ‘who’. Find the ‘who’, and the rest becomes obvious.

Many of my 2012 resolutions where about the lifestyle I wanted to live. As it turns out, I was reverse-engineering this lifestyle goals using the wrong thinking path of “How->Why->What”.

When you start with the ‘how’ or the ‘why’, your goals are born out of fear, greed, and short-sighted thinking. Ultimately, the ‘what’ does not resonate with you, and the goal is missed. As I hate writing about stuff that I don’t care about, it was incredibly stupid of me to resolve to do just that!

How I Found My Deeper Calling

The correct path to choosing your goals in life, explained Phil, is starting with who you are and then realizing what you want and why. At that point, the how should become obvious. It’s “Who->What->Why->How” vs. the common “How->Why->What”.

Using an exercise that Phil gave me (and is included in his fantastic new book, scheduled to be released at Q1 of 2013), I finally found my ‘who’. These are my 6 core values that will serve as my compass in 2013:

Putting The Rubber On The Road

Looking at these values, I realized that my problem was not corporate vs. entrepreneurship or freelancing. My problem was that I was not satisfying my core:  I was not making a difference. I was not growing.

Look, I know there’s an endless debate of “Should passion be your work? Should work be your passion? etc.” But reflecting on 2011 and the first half of 2012, I extracted the following three life lessons:

It’s now time to create my resolutions for 2013

This year I’m using a different process, combining core values with Google-style goal making. I will share the process and my resolutions with you on my next blog post — I bet it could help you with your own resolutions, so stay tuned!

How about you? Did you make your 2013 resolutions already? Answer YES or NO in the commets section below! 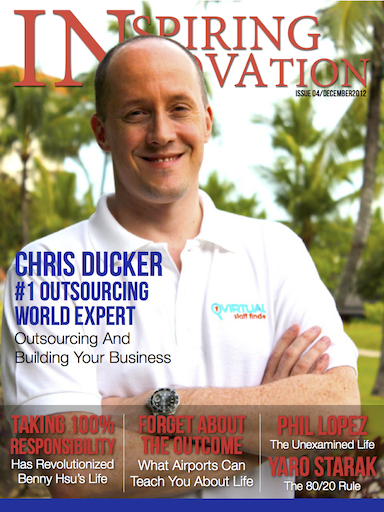 Issue #4 is out, featuring as cover story Chris Ducker, #1 outsourcing world-expert on outsourcing and building your business [exclusive interview].

How much does it cost?

You can get a FREE 2 months trial for the magazine, and cancel at any time.

Just go to this link from your iPad and hit the SUBSCRIBE button once the app is installed: http://inmag.co/mag

Chris Guillebeau recently shared a question on his blog:

You arrive very late at an airport you haven’t been to before. Security takes forever, but the flight is on time—which means you’re even more rushed. You walk into the terminal and look for your gate: A70. Damn… you’re currently at A18. Above you is an “Express Train” that runs between A1 and A75 with an unknown number of intermediate stops.

You know if you take the escalator up to the train and catch a ride it could be faster—but remember, you’re unfamiliar with this airport… remember, time is short. You have only ten minutes to get to A70 before they close the flight.

It’s up to you… what do you do?
The Art Of Non Conformity

The question really is how much control are you wiling to give up on? Today, I would take the train.

It’s not because I’m lazy, or because I come from a country where it’s forbidden by law to leave passengers behind (I often forget that this is not the case in other places around the world). I’d do it because I became well-adjusted to finding myself in unexpected circumstances, and figuring things out.

I trust my ability to respond in an agile manner, regardless of the outcome I originally went for. Remember, I might miss the flight in any of the alternatives either way, so why run like a maniac? Better off choosing one action, such as going up the stairs, and figure it out from there. There’s always another flight leaving sometime, if this doesn’t pan out.

I left Israel 100 days ago. Due to an unexpected change of circumstances, I had to find my way back, QUICKLY. Reflecting on my time in Denmark, I realized that the original outcome I was aiming for (leaving Israel and living a much less stressful life) was not the most beneficial one.

Learning how to figure things out quickly and making rapid-action-taking my way of living, is the most significant benefit of this period abroad. Taking action brought me outcomes that were both unplanned and beyond any of my expectations or dreams. “It is wiser to find out than to suppose” said Mark Twain.

On the last issue of Inspiring Innovation Magazine (get it at http://bit.ly/InMagApp), I discussed how bold actions scored me 4 days and a dinner with Internet Marketing guru – Ed Dale.

This post, that my good friend Ralph Quintero found and shared, gives you the ultimate method, system or recipe for luck. Much like the Liquid Luck potion in Harry Potter:

What It Takes To Be Lucky

Professor Wiseman find that optimistic people are luckier and sets out four principles that can help any of us become ‘luckier’ in our lives. All we need is to:

You can become luckier. It’s easy. Start taking massive actions, and KNOW that success, happiness and fortune will follow

Meron
Sent from my iPad, who might not have Google Maps on, but sure as hell is kicking ass.

Last month I had the pleasure of interviewing Stacey Ferreira, co-founder of MySocialCloud. The story of how Stacey and her brother Scott brought their company to existence is truly exceptional.

The Girl Who Made $1M From A Single Tweet

Many people, myself included, referred to Stacey recently as “the 19-year-old girl who got $1M from Sir Richard Branson by sending a single tweet“.

Although that is, in general terms, true – it’s only half of the story.

Yes, she responded to a tweet by Sir Branson and met him in person. Yes, Sir Branson did invest money in Stacey & Scott’s company.

But at least for me, the two siblings’ mindset is what made it happen – and that’s the crucial part of the story.

HOW did Stacey and Scott do it? With an amazing entrepreneur mindset and attitude. With courage. With characteristics that cannot be learned in school and actually defy most educational systems.

And so, I wasn’t at all surprised to see this blog post written by Stacey:

“At 18 years old, and after countless hours of thinking about life and the seemingly long checklist of things I must accomplish in life – I began seriously questioning it. Weren’t we meant to create our own life rather than live the life that everyone else has already lived to some extent?”

I know exactly how Stacey feels. I went through a similar phase myself. I was only 15 years-old when I began my undergrad studies. I started at such an early age because I was already defying highschool education.

For me, highschool was merely a task on the checklist of requirements for college. Besides being this preliminary requirement, I see highschool as an advanced baby-sitting service.

So I left highschool and went to college, and I was having the time of my life.

I started dreaming about graduating and pursuing an academic career. I was approached by a Stanford University professor, who wanted me to come and spend the summer at their labs. I already had the M.I.T. sign-up kit for a master’s degree filled in. I was so far ahead of the game, being able to accomplish all of this before the age of 18.

Or so I thought.

Then a car accident changed my life for ever

It was almost midnight, and the last rain of the season was falling. I was standing in a traffic light less than 5 minutes away from home. As I was waiting for the light to change, I was suddenly blinded by headlights that appeared out of nowhere. I don’t even remember the crash. My next memory is the complete silence.

I later learned that a speeding driver approaching the traffic light has lost control due to the poor weather conditions, and smashed his car directly into the front of mine.

I ended up laying down for months over months. I was unable to return to class. In bed, my entrepreneur gene raised its head. I decided to start my own business from bed, while I was recovering.

When it was time to return to school, I came to a staggering realization: I didn’t care anymore. I didn’t care about school and its education anymore. I realized that none of the obstacles that I was struggling with in my new business will be solved by anything I was taught in school.

Actually, the opposite was true. The mindset that students were supposed to develop in (most) undergrad-schools, of hard-working, self-learning, task-completion, working-solo, grade-centric way of thinking, actually guarantees you will be an excellent employee, no more and no less.

I couldn’t help but wonder – What if I’m not prepared to spend my life working for someone else?

“What if I’m not prepared to spend my life working for someone else?”

Stacey & Scott were working on MySocialCloud as a summer project. When Stacey’s holiday ended, she was supposed to go back to school. Still, wanting to keep her new business running, clash was inevitable:

“My heart was no longer set on education in the way I had been receiving it in the classroom; instead it became more set on learning through doing – at this point in the form of building a business.

And when I noticed college was forcing me to give up the life I truly wanted to live, I became extremely frustrated with school, it’s cookie cutter requirements and its hindrance of my learning (the learning I actually wanted to do rather than the school requirements). “

Stacey took a brave choice, and it changed her life for good. Now she’s co-running MySocialCloud, and getting more experience under her belt than any undergrad student can even dream of.

It seems that the best answer for you, more often than not, is being yourself, and doing what you want, not what society’s norm expects you to do! It’s impossible to be extraordinary if you only take ordinary actions. (Click here to tweet this)

If you want to get my full video interview with Stacey – where she tells her whole story, including one little secret that made it all happen – it will be coming up on the September issue of Inspiring Innovation magazine. Click here now to get the Inspiring Innovation Magazine and claim your free 3 months subscription.

If you have an aspiring entrepreneur friend, please share this page with him now. It might just change his life.